I read a story of power of vasiya marunthu


it is said to happen in an ancient  kerala village named penmalayalam
in that ironical village once lived a rama who was married to gopalan , but gopalan was always in search of others and cheated his wife . so once when she was crying to god about his husbands conduct . her distant grandmother saw her and handed over her sacred grathas of siddhars ,

as per the grantha she prepared the mixture of atar root ,cora mai,iyumkolam, sidharthundi root,... and her blood and gave it to his husband  , who then turned to a pervert , who then after did her regular house chores, as per the story he was a literal slave .

But her grandmother had asked her not to hurt or harm her husband . but eventually she started to enjoy her life as such her husband turned to amere slave , rama watched her husband wash her clothes and do all the house work as cleaning the dish washing thara ( the varandha), watering the plants ..
usually in kerala when the head of the family (male ) goes out and returns back his wife used to wash his feet and welcome him  that was the tradition.
but rama made her husband wash her feets as she entered the house and hurt the tradition

Rama also became a greater magician therby learning newer frequencies of magic , while gopalan was made her disciple . from the position of wife ahe elevated to guru ( master , teacher ) ,
gopalan helped her in acheiving higher levels of magiccraft by his obedience and service to his guru rama
but inspite of warinings from her grandma she started hurting all people through witchcraft , and
suddenly one day it happened
the person is not allowed to enter into worship god after sexual intercourse if done she . he should purify her /him
rama was using gopalan by all the means for achieving special powers ( shakthi , attainment ) and also for her pleasure .
and gopalan was hypnotised in such a state that he existed to make rama happy .
one day she completed her tantra puja
and by the time gopalan was exhausted but she wanted to make herself happy . she presurized him and he fall unconsiously , to bring him back she required the help of the deity.
the deity killed her because she offered prayer without proper sanitation
and her descendents seeks forgiveness from her grandma
and story ends . 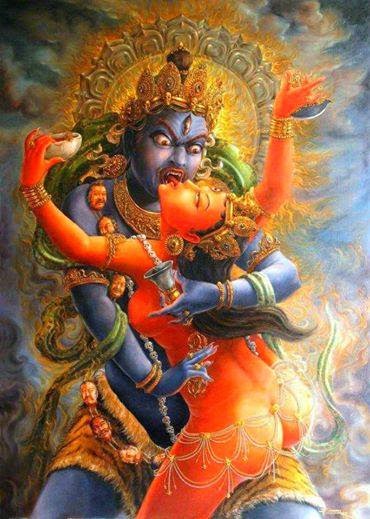 Posted by Yogictraditions.com
Email ThisBlogThis!Share to TwitterShare to FacebookShare to Pinterest
at 2:32 AM